Stately City Palace and a piece of Mallorcan history 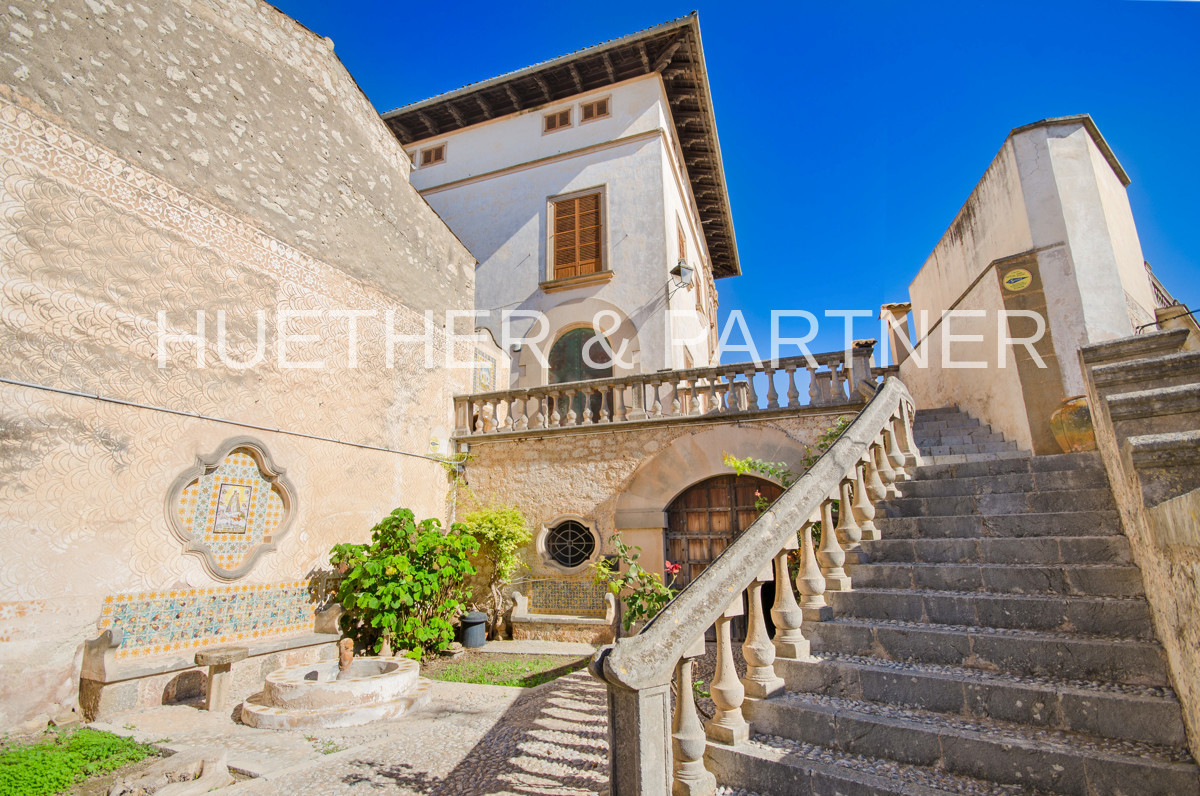 Stately City Palace and a piece of Mallorcan history

Anyone coming to Montuiri will not miss this building, especially since it has now even been integrated into the city tour due to its historical importance.

Describing this city palace is not easy. You really have to step in and feel it, because this house is more than just an imposing building. It is a contemporary witness that takes one back to a past century.

An electric gate leads to the front yard of the house, where a fountain and a tile mirror wall decoration line the way to the entrance. In front of the large wooden door, there is a well and a small storage room.

In the basement, which used to be a garage and storage room, there are now several rooms in different niches that can be individually designed.
An open plan kitchen, a brick seating area with a fireplace and a large wood-burning oven for baking bread form the centre of the basement.

This area is currently still registered as a warehouse but has not been used as such for around 30 years. It was designed by an artist as a studio and bedrooms and a bathroom were created here for guests or staff.
It would be ideal to set up a small bodega and use the many beautiful niches as various seating areas.

An outside staircase leads to the actual house.
It is surrounded by large terraces and brick, tiled benches with a 360° views of the entire island.

The large open entrance area was designed as a living area. Behind it is a second, smaller living room.
The wooden ceilings with beams or coffers and the large chandeliers are impressive.
On this floor there is also a spacious study and a bedroom with bathroom en suite. This has a hip bath.
Next to the stairs is a well, which still has water today. A large, open staircase leads to the two upper floors.

On the first floor there is a living room with dining area.
There is also another bedroom, a bathroom with double vanity and bathtub and an adjoining walk-in dresser. There is also a kitchen with storage room and pantry. Marble floors make up the shelves in the pantry. Behind the kitchen is a terraced balcony from which an external staircase leads back down, where a tiled fountain and grape vines frame the house.
In the living area there is an imposing marble fireplace and the floor-to-ceiling windows offer a wonderful view towards Klosterberg Randa.

The Marés stone staircase leads to the second floor with five bedrooms. Four of these bedrooms have their own basin, so that later the number of bedrooms can be reduced and more bathrooms can be set up.

Some of the antique furniture, which takes you on a journey through time, can be taken over. The owners would like to keep a few favourite pieces.

This city palace has a good condition, however, the windows would have to be renewed.
There is also a variety of options – be it to preserve the old charm of the house, but also to design a modern residential building that is second to none.

You will not find another property like this on the island. Not only is it a very special town house but also a piece of Mallorcan history.

This palace is just waiting to shine, in new splendour, above the roofs of Montuïri.

Perched on a hilltop and surrounded by stone windmills, the medieval town of Montuiri (from Latin meaning hill town) is a paragon of traditional, rural Mallorca. It is 30 kilometres east of Palma at the centre of the island.

Today the village is primarily residential and as such is one of the most popular in central Mallorca.

Montuiri has particularly good fresh produce from the region and some very tasty Mallorcan wines. The whole area is characterised by a strong agricultural tradition, so you can count on high quality products such as sea salt, honey and olive oil.

The most beautiful viewpoints of the area can be found on the top of the ‚Puig de Sant Miguel‘ mountain, where there is the Santuari de la Bona Pau sanctuary, which dates back to 1395 and stands on the site of an earlier hermitage.

Nearby is one of the best golf courses in Mallorca – the championship course Son Gual.

* Basement (former warehouse) usable in various ways
* the rooms on almost all floors have a ceiling height of 4 meters
* Own well in the main building
* Own well in front of the house
* Brick stone benches
* Chandelier
* Furniture can be partly taken over (negotiable)
* 3 terrace areas, a balcony and a free entrance
* in 3 rooms there are built-in wardrobes, which were specially made by a carpenter
* many winding areas around the house, with its own grape vine and orange tree
* designed by architect Guillem Forteza in a regional style

Guillermo Forteza Piña (Palma de Mallorca, 1892 – ibidem, 1943) was a Spanish architect and politician who designed numerous schools in Mallorca from 1921 to the Second Republic.
He trained in Barcelona, ​​where he taught at the School of Applied Arts from 1925 to 1930, and was appointed city architect of Palma in 1933.

His works were initially classified as influenced by classical tendencies.
Forteza is best remembered as a school architect, a task in which he evolved towards more rationalist positions.

At the political level, between 1917 and 1919, he was President of the Regionalist Centre of Mallorca. He then switched to the Liberal Party, dominated by Juan March, and became Mayor of Palma in 1923.

Some of his works on architecture have been recovered and published, such as „Estudios sobre arquitectura y urbanismo“ (Barcelona, ​​1984, 2 volumes).1