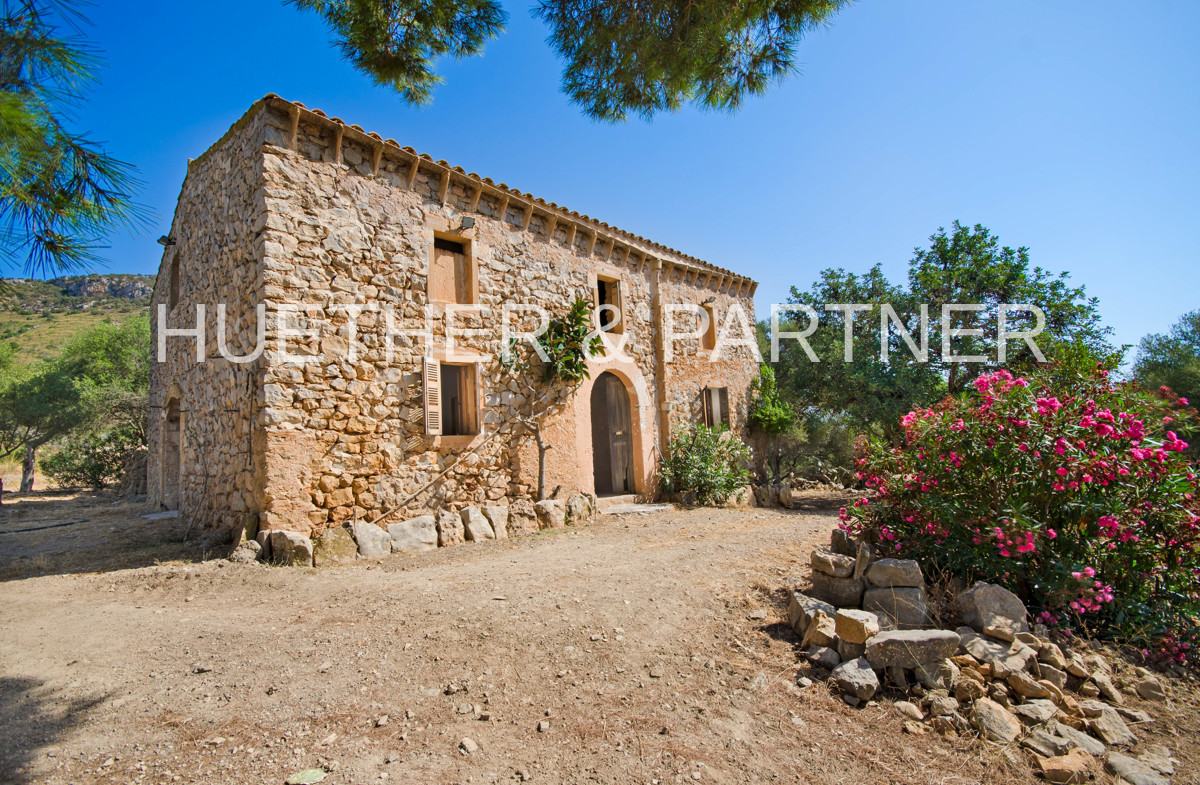 This well situated finca is located in the region of Sant Llorenc des Cardassar and has a unique panoramic views.

The mountain behind the property looks down on the house.
From the 50,000 square meter site, consisting of several plots, one can see the monastery of Sant Salvador in Felanitx in the distance. In front of the house one can experience a view of the coast and the sea and on the other side, on a clear day
right across the valley to Menorca.

The finca was completed in 1935 and currently gets its electricity from a generator. There is no running water or sewage in the house. However, there is a 200 m deep well with an electric pump.
An updated „Escritura“ has been applied for, to include the new project. A new building on the property is not possible, as only part of the land can be declared as buildable. A house that has been completely renovated and expanded according to your own needs can currently be built on the foundations of the existing finca. Furthermore, a 15 s㎡ sea view pool can be built in the area of ​​the old cistern in front of the house.
As soon as these conversion measures have been approved, the conversion to a very personal dream finca can begin.
At the moment it is still possible to influence the plans.
The submission and issue of the license costs are around 20,000 euros and will be billed separately (probably via a notary) in addition to the purchase price.

Located in the northeast of Mallorca, Sant Llorenç is just a few kilometres away from Manacor.
The authentic Mallorcan village is surrounded by countryside and an agricultural area with almonds, herds of animals, fig and olive trees.

In the village itself has many facilities (shops, drugstores, groceries, banks etc.) as well as restaurants, bars and even a small hotels.
There are also schools and other public service buildings in Sant Llorenç.
2000 years B.C. in the Bronze Age, pre-Talayotic people lived in the area that today belongs to Sant Llorenç. For this reason, there are a large number of archaeological sites. In 1892, Sant Llorenç became an independent municipality, which includes S’Illot, Cala Millor and Sa Coma. .

Sant Llorenç was connected to Manacor and Artá ​​by train until 1977, when the service was discontinued. Today, the former railway line is ideal to go running, cycling or horseback riding.
The VIA VERDE – as the route is called today – connects Manacor with Artà and also passes Sant Llorenç.

In the centre of the village is the 14th-century Baroque church that stands on Plaça Nova, the village’s central square.

* Over 50,000 m2 of land
* Own well
* Enlarged finca with a new construction project
* Panoramic view
* Complete privacy
* Electricity could be supplied via solar panels after the conversion
* Septic tank to be built
* There is already a storage room in the planned kitchen room
and a large fireplace

This finca is a very special property, that you simply have to see, in order to appreciate it´s full potential. Build your dream.

We are Main Agents in the area and can offer you personal service and local advice.
Call: Charles Westlake-Wood for more information or to book a viewing appointment on 0044 7930107125.